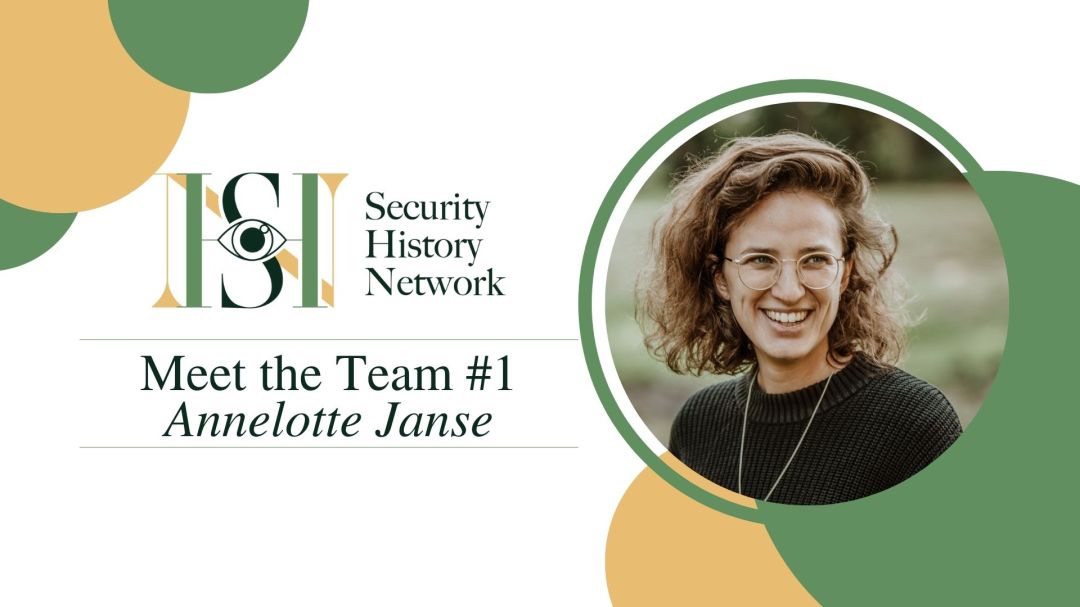 PhD Candidate in history of right-wing extremism at Utrecht University

Annegreet Silvius (Intern at SHN) speaks with one of the Security History Network’s core team members: Annelotte Janse MA, a PhD Researcher in Security History at the History of International Relations section at Utrecht University.

Annegreet: What motivated you towards doing a Phd in this field?

Annelotte: During my studies, I was always amazed by the fact that whether you intimately study the life of just one person or scrutinize, from a great distance, major political issues of the past centuries, at every level you learn about human interpretation, communication, and reactions. Why did someone react in precisely this or that way, what context helps explain that reaction, and how might these reactions in the past be related and applied to our own lives and society? As such, I felt history to be a mirror of humanity and human behavior, with the present as its outcome. Throughout my studies, those kinds of questions became wedded to another big question that increasingly preoccupied me: why would people (want to) use violence against each other based criteria such as race, religion, culture, gender or sexual orientation?

Researching right-wing extremism in post-war Western Europe seemed the perfect way of combining my interests and questions. And seen from hindsight, studying the historical development and internationalisation of right-wing extremism through the lens of ‘security’ makes perfect sense as a way of fundamentally engaging with these questions as well. Interpretations of security and threat (regardless of ideology) are very powerful motivators for any type of (re)action.

Annegreet: What is your current research focused on?

Annelotte: For my PhD, I study the historical development and internationalisation of (West) German right-wing extremism since the late 1960s until 2000. I do so by zooming in on the extreme right’s long-time preoccupation with ‘security’ and ask what role right-wing interpretations of ‘security’ played in the discourse and organisation of right-wing extremist groups. Studying extremist perceptions of ‘security’, ‘threat’, and ‘danger’ teaches us so much more about intrinsic motivations, action repertoires, and long-term developments within the scene. But the concept of ‘security’ provides also us a means with which to reveal the historical transnational dimension of the extreme right. Present-day manifestos that call for ‘the security of the white race and culture’ are no more than the most recent carriers of security perceptions that transcended national borders. As such, shared conceptions of security and threat have long forged connections between these groups and superseded national contexts.

Overall, then, I see right-wing extremists’ appraisal of threat and danger not only as their fuel to thrive, but also as a discursive platform, if you will, for international exchange and cooperation among the extremists themselves.

Annegreet: How do you see your role in the network?

Annelotte: In the Security History Network, I feel first and foremost responsible for ‘the beyond’ aspect: to make sure that the role of security in the 20th and 21st century is equally accounted for in terms of research, members, and events. So I am really excited about making that connection between the fact that the nineteenth century was foundational for security logics and the way these logics made their mark in later times too. As a PhD candidate specifically, I also want to focus on drawing other early career researchers into our network.

Annegreet: What do you think the value of the SHN will be?

Annelotte: I strongly believe the network will help us all get out of our ‘research comfort zones’ and look beyond the borders of our own fields, periods, and geographies even further than we already do. As a consequence, I expect the network to bring together a rich and diverse body of researchers at various stages in their career, creating an open community of and for experts to learn and cooperate. Ultimately, by arranging all these different approaches and interests into a bright array of ‘security histories’ I hope we can reveal the many shades of ‘security’ as a contested concept and its real-world consequences.

Annelotte Janse is a PhD Researcher in Security History at the History of International Relations section at Utrecht University. Her research focuses on right-wing extremist violence and terrorism in the post-war Western world. In her PhD research, Annelotte studies the role of right-wing extremists’ perceptions of threat and security on the actual use of violence. Both the ways in which right-wing extremists have perceived threats and the means by which they have countered them, have been subject to substantial change since the 1970s. Consequently, the Extreme Right has transformed into a dynamic movement: right-wing extremist actors have progressively displayed a great deal of flexibility in ideology as well as organizational affiliations. The Extreme Right has therefore increasingly been characterized as an ‘elusive threat’ within society. However, tracing right-wing extremist perceptions of security, threat, and interests uncovers the tale of change and continuity within and the development and transformation of the international Extreme Right and its relationship with violence.

In August 2019, Annelotte completed the RMA Modern History at Utrecht University with distinction. Her master’s thesis focused on the security perceptions of the Dutch Extreme Right between 1945 and 2018. A research internship at the ERC SECURE Project, led by prof. dr. Beatrice de Graaf formed the basis of her master’s thesis. Among her further research interests are fields and themes like the modern history (20th-21st century) of terrorism (both left and right-wing), fascism, European securitization efforts, and security thinking.

Janse, A. (2021). From letters to bombs. Transnational ties of West German right-wing extremists, 1972–1978. Behavioral Sciences of Terrorism and Political Aggression, 1-18.

< Back to all INTERVIEWS