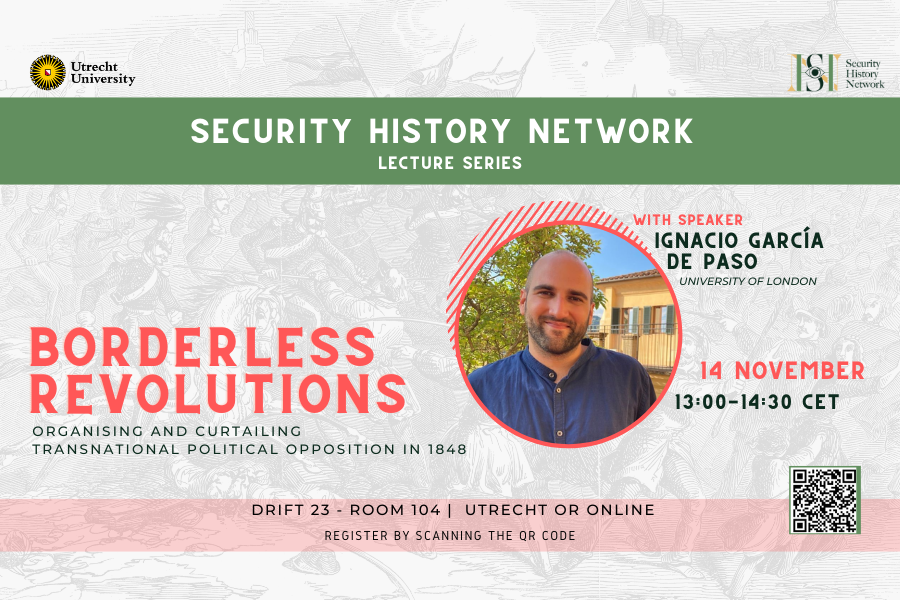 The Security History Network invites you to join us in the first lecture in this year’s SHN Lecture Series, Borderless Revolutions: Organising and Curtailing transnational political opposition in 1848, given by Ignacio García De Paso.

The Security History Network invites you to join us in the first lecture in this year’s SHN Lecture Series, titled Borderless Revolutions: Organising and Curtailing transnational political opposition in 1848 and given by Ignacio García De Paso.

Ignacio is a historian of Modern Europe in a global context, with a special interest in nineteenth-century revolutions. His research project as a Pearsall Fellow at the Institute of Historical Research at the School of Advanced Study, University of London, is titled ‘Waves of Revolution: The 1848 Revolutions in Maritime Perspective’, and aims to develop a global perspective of the revolutionary cycle by focusing on sea mobilities.

Ignacio’s research focuses on nineteenth-century global history, with a focus on the 1848 revolutions. His research interests focus on revolutionary mobilities, transnational activism, popular politicization, and empire-building. Ignacio carried out his Ph.D. at the European University Institute in Florence, where his thesis “The Storms of 1848: the Global Revolutions in Spain” was submitted in 2021. In his thesis, he used the case study of the Spanish Empire to trace the global connections of 1848, paying special attention to the intersections between the revolutionary cycle and empire building. Throughout his Ph.D., he has been a researcher at the Centre d’Histoire du XIXe Siècle (Université de Paris 1 Sorbonne-Panthéon) and a fellow at the Leibniz Institut für Europäische Geschichte (Mainz). During his year as Pearsall Fellow, Ignacio is approaching the study of the 1848 revolutions’ maritime dimension by using the trajectories of several ships as case studies. From a global micro-historical perspective, the transits followed by these vessels will allow the research to re-spatialize the revolutionary cycle and move away from Euro-centred narratives. Furthermore, this approach will expose the entanglements that existed during the 1848 revolutionary period across a wide range of topics that include settler colonialism, transnational arms trafficking, and imperial propaganda.

More about this event

We invite you to join us for this event on Monday 14 November 2022 from 13:00-14:30. This event will be held in person at Drift 23, Room 104. Please register your attendance here. The event will be livestreamed for those who cannot make it.